Welcome to the VCB Mounties!

The VCB Mounties have offered organized baseball for girls and boys aged 13 to 18 living in Vancouver since 1995. From recreational house leagues to elite traveling teams at all levels, we treat all our programs and players with equal importance! We emphasize player participation and skill improvement at all levels.

The VCB Mounties coaches are all NCCP certified and focus on skill development at all levels. We are proud of our history and inclusive approach to developing and teaching baseball skills, including offering all-female teams, while creating a community focused approach which is centred around the enjoyment of baseball.

VCB's long-time 15U AAA Head Coach, Pat Chaba, has decided he needs some time away from baseball next year, so we're looking for a suitable replacement for him.

Please view the Job Description here.  We would like to get this filled by Oct. 7

Registration for the integrated (mixed-gender) 13U, 15U and 18U teams is closed.

Please navigate over to the Fall Ball page for full details. 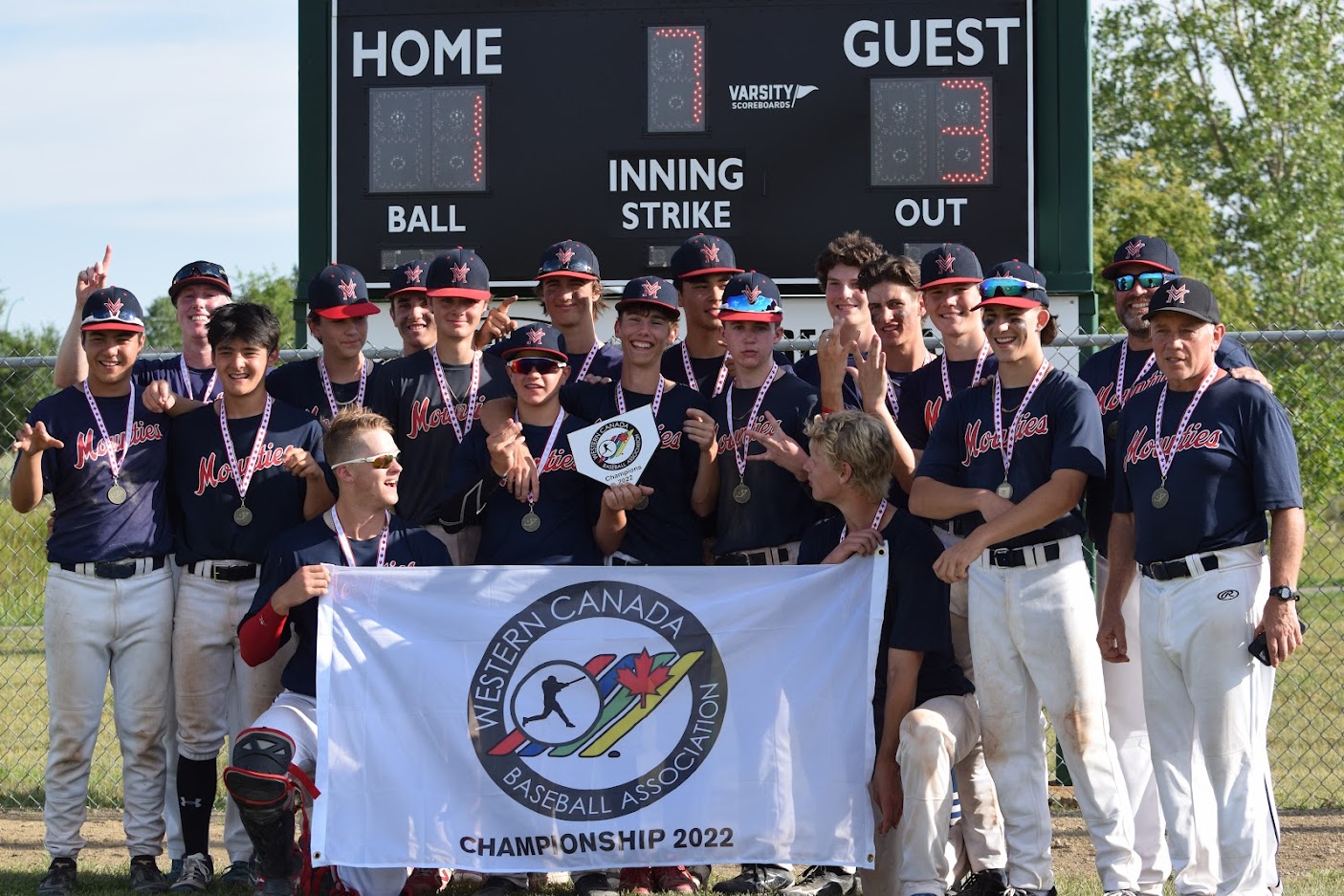 2022 18U AA Mounties in Estevan, Saskatchewan

The 18U AA Mounties completed their season in spectacular fashion, winning the Western Canadian Baseball 18U AA Championship, hosted by Estevan, Saskatchewan.

The score in the final game was 3-1.  Pitching for the Mounties was Mikey Norcott, an ace pitcher picked up from Ladner.  Norcott pitched 6 innings, allowing 1 run on 4 hits while striking out 7 batters.   Jaron Palaschuk pitched the final inning, striking out the last batter to end the game.

Morgan Fairweather, Lucas Smith, and Levi Soper drove in the runs for the Mounties, who scored two runs in the 4th inning and added an insurance run in the 6th inning.

Lucas Smith had an excellent game at first base, turning a 6-3-2 double play in the first inning, followed later by catching a line drive and doubling-off a runner on 1st.

Leading up to the Championship game, the Mounties defeated the host team from Estevan, 8-0, behind Ben Black's pitching.

In addition to Michael Norcott, the Mounties picked up Brennan Braddick and his coach father, Dan, from the Vernon Canadians.  Here's a link to a story about them in the local Vernon Morning Star newspaper.

18U AA Mounties are Provincial Champions! 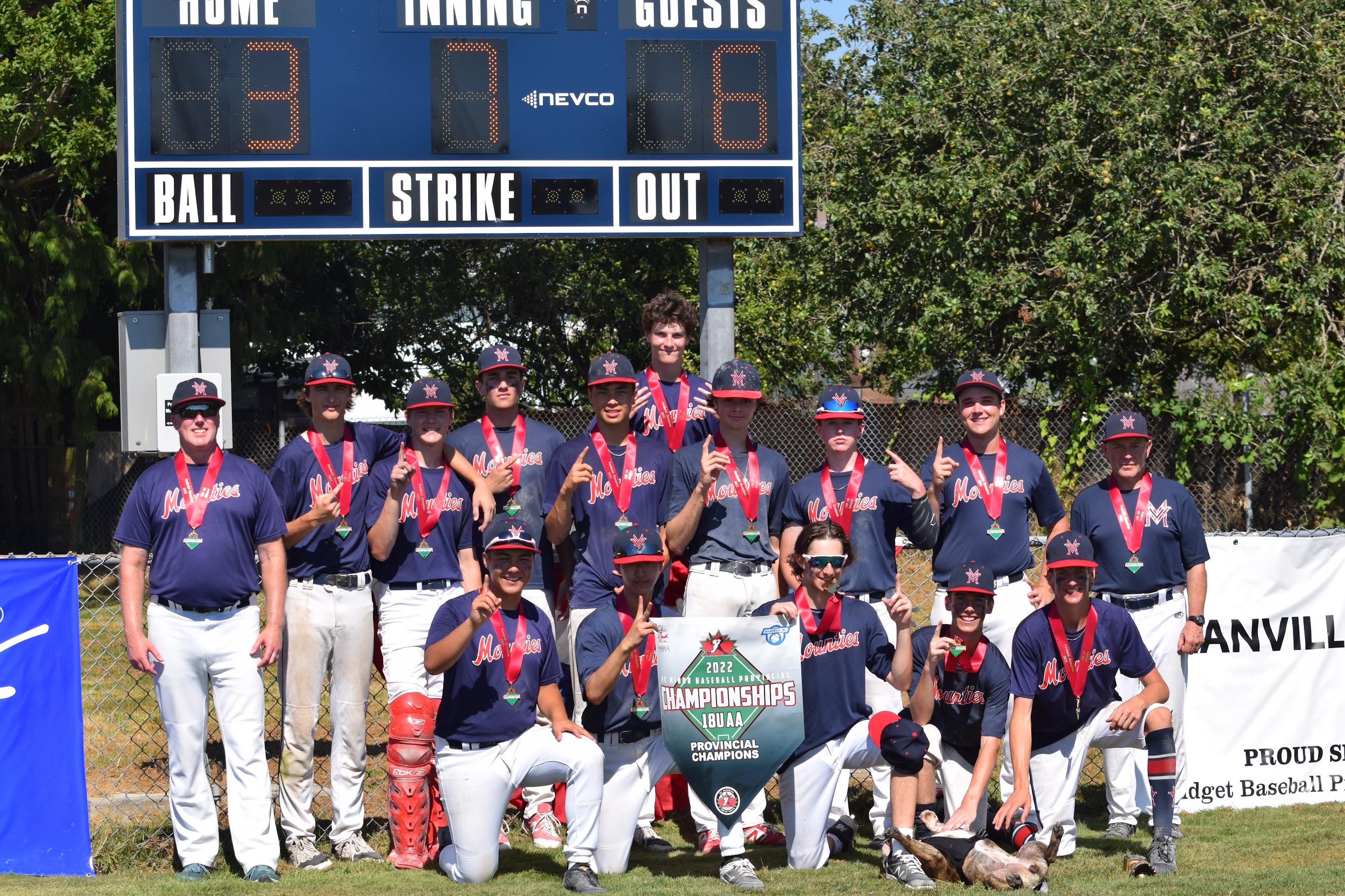 The Vancouver Mounties 18U AA team defeated a very strong team from Ladner in the Championship game today, 6-3.

Jaron Palaschuk started for the Mounties, allowing 2 runs on 2 hits in 5 innings.  Ben Black closed out the game, striking out 5 batters while allowing 1 run (unearned) in 2 innings.  It was an amazing display of pitching.

The Mounties also had some excellent defense from Kenta Milum at 3rd who fielded 2 hard-hit balls without making an error, as well as Morgan Fairweather, who caught the game, didn't allow a wild pitch or passed ball, and threw out a base-stealer at 2nd.

Offensively, the Mounties got hits from Lewis Sale, Ben Black, Jaron Palaschuk, Jack MacAulay, Morgan Fairweather, Kenta Milum, and Josh Epp.  Josh's hit really put the icing on the cake, as it came in the top of the 7th with 2 outs and runners on 2nd and 3rd.  Josh smacked an 0-2 pitch back up the middle, scoring both baserunners and putting the Mounties up 6-2 going into the bottom of the 7th.  Ladner did get a run back in their half of the 7th, but were unable to close the 4-run deficit.

The Mounties will be playing in the Western Canadian Championship tournament August 19-21, against teams from Alberta, Saskatchewan, and Manitoba, as well as the host team from Estevan, Saskatchewan.

Here's a link to a post in the Delta Optimist about the game.

Please click on the icons below to be taken to the VCB Mounties Social Media sites.