15U "A" is the House League for Vancouver Community Baseball's 15U Division.  New players are welcome to join up, even if you've never played baseball before!

Vancouver Community Baseball's 15U A Spring season division consists of 8 to 10 teams, depending on the number of players registered.  There are 13-15 players per team.

At the conclusion of the regular season, there is a double-elimination playoff to determine a season champion team.

There is one 90-minute practice per week.  Practices are held at the Chaldecott Park practice diamond.

15U A is a "bat through the order" division.  There is no limit to the number of defensive substitutions, except for the pitcher: after a pitcher is removed from the mound, he or she cannot pitch again for the rest of the game.  They can play any other position ( including catcher), however.

For safety reasons, Vancouver Community Baseball's 15U A Division does not allow the use of shoes with metal cleats.

All players are to provide their own batting helmets and grey baseball pants. Caps, belts, and dri-fits are provided by the league.  These are yours to keep following the season.

For interested players, there is a second baseball season which follows the spring season.  The summer season is managed by BC Minor Baseball.  Each BC Minor Baseball Association can enter one or more teams into the league (most just enter one team).

The summer season runs from late June until the 2nd weekend of August.   During that weekend, a provincial tournament is held to determine a Provincial 15U A Champion team.

There are other open tournaments during July that summer teams may enter as well.

In late April or early May, players will be asked to submit applications to play on the VCB summer team.  The roster is usually 13 players, so if more players want to try out, the head coach will conduct a try-out to select the most capable players.

BC Minor Baseball rules require that players play a minimum number of games in their association's spring house league to be eligible to play on a summer team.  As in spring league, we use a continuous batting order (not 9-man ball) and there are minimum play rules which coaches must follow.

Players selected to the summer team will pay an additional registration fee over their spring season registration fee (approximately $200).  They will also be required to submit a commitment letter, signed by both parents, indicating dates/times when the player will be unavailable for baseball during the summer season.

The 2019 Bantam A summer team will be coached by James Fairweather. 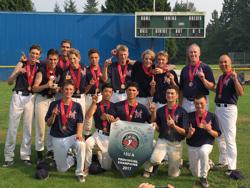 The Mounties won the Provincial Bantam A Championship

VCB sends its congratulations to the Mounties, who won every game they played during the summer season.

A big thanks from Vancouver Community Baseball to all the businesses listed below, who help to keep youth baseball affordable for Vancouver Westside families.

If you are interested in having your business listed here, please contact our sponsorship coordinator, Robyn Robinson.